Land beyond the Forest:Two days in...

Land beyond the Forest:Two days in Transylvania

A private tour for your group only! No other tourists! As always, we are happy to create a specialized tour to meet your interests and requests.

“Transylvania is the last corner of Europe where you can see true sustainability and complete resilience. There’s so much we can learn from it before it’s too late.”

What better introduction to this two-day tour than what Prince Charles tells us? Thanks to Bram Stoker’s novel about Dracula, and a boost from Hollywood, most tourists come here seeking a vampire or werewolf experience. While Transylvania is ancient and mystical, its history and diversity make it much more interesting than the myths.

For two days, we’ll explore the region, visiting major attractions and modest villages. Transylvania has a rich heritage. From Bran Castle, now attributed to Count Dracula, to a tiny village with a UNESCO-designated church from 1218, we promise to inform and delight you with the customs and traditions of this region of Romania.

This is a moderately active tour! Most days are light to moderately paced - but two days are strenuous - with 2-8 miles of walking, lots of stairs, and hilly terrain.

We will pick you and your group up at the hotel or address where you are staying at 09:00. We’ll drive about 1½ hours to the Bucegi mountains, where our first stop is the city of Sinaia. This is one place most tourists want to see, because of its breath-taking natural beauty and for its connection to Romanian Royalty.

We’ll make a stop at Sinaia Monastery, founded in 1690 by a Romanian prince, after his pilgrimage to Mount Sinai. The Old Church has a beautiful painting of The Last Judgment, done when the church was first built. The Great Church was started in 1842, and features frescoes of King Carol I and his family.

Peles Castle is considered the most beautiful castle in Romania. King Carol I built his magnificent summer castle here after he saw the spectacular mountains. Construction began in 1873, and required architects, engineers, artisans, and craftsmen from 14 countries. It was the first European castle to have electricity, elevators, and central heating. Our guided tour of Peles Castle covers 18 ground-floor rooms. During the tour, we will see the Imperial Suite, the incredible Reception Hall, the Florentine Hall, and the Louis XIV Hall, with paintings by young Gustav Klimt. You will also see Romania’s first “at-home” cinema! (NOTE: There is a fee for interior photography during the tour.)

Following the visit to Peles Castle, we will stop for lunch at a local restaurant known for its Romanian cuisine. If you have not tried venison before, this is your chance! (NOTE: Because each person has individual tastes, you are free to order as you like. This cost is not included in the tour.)

Next, it’s on to Bran Castle. Sitting high on a rocky cliff, it looks mysterious and spooky. First documented in 1377, the sheer walls and spikey towers show its purpose as a fortress. But once you’re inside, you’ll forget about the Dracula stories, which author Bram Stoker based very loosely on “Vlad the Impaler,” who was imprisoned here briefly. Indeed, the castle—and the village of Bran—was given to Queen Maria of Romania in 1920, as a gesture of gratitude for helping unite the country. She made it cozy and welcoming, unlike the exterior.

We end our day in Brasov, a delightful town, with Medieval watchtowers and Gothic spires. According to legend, this is where the Pied Piper of Hamlin led the children from Germany. Before we check in to our 4-Star hotel, we’ll do a short overview tour of Brasov. Dinner this evening is on your own. Your guide will gladly direct you to several restaurants.

Another day in Transylvania! After breakfast at the hotel, join your guide in exploring Brasov. The history of Brasov goes back to 1211, when it was founded by Teutonic Knights. The Black Church, named for its dark walls after surviving a fire in 1689, is the largest Gothic structure in Eastern Europe. You can also walk down Rope Street, the narrowest street in Europe, or shop at the two markets connected by Council Tower. Your guide will point out the many gates and towers in the town, as well as the architectural highlights.

Only 15km (9.3 miles) away is the tiny village of Prejmer, where we’ll stop to see its fortified church. Originally built in the 1218 by Teutonic Knights, it was reinforced in 1421 with five towers and a surrounding 4.5m thick wall, making it impossible for battering rams to penetrate. Four tiers of storerooms meant that the village could safely weather a siege. One of the storerooms even served as a school classroom. Besides being the most fortified, the church is the most spectacular in the region, earning it UNESCO Heritage designation.

After our visit to Prejmer, we’ll stop for lunch. (Cost not included in the tour.) Then, onward to Viscri, a humble village that almost disappeared until its ambitious mayor, Caroline Fernolend, whose ancestors arrived in Viscri in the 1200s, launched a campaign to save her precious village. She rebuilt traditional farmhouses, restored buildings, and replaced facades, using authentic materials and methods, and made many into guesthouses. Viscri women have created cottage-industries of knitted socks and embroidered felt.

One of the most traditional villages in Romania, Viscri went unnoticed until 1996, when Prince Charles purchased one of the homes. The village’s beautiful white fortified church is a UNESCO Heritage Site and dates to the 1100s and is one of Romania’s most impressive. Look for Lard Tower, where each family stored a side of bacon with their house number on it, in preparation for a siege.

Saying good-bye to Viscri, we begin our return to Bucharest and your hotel or any other address that you wish. We hope that two days of exploring Transylvania, seeing the castles and villages, and learning its unique history will entice you to visit again and again. 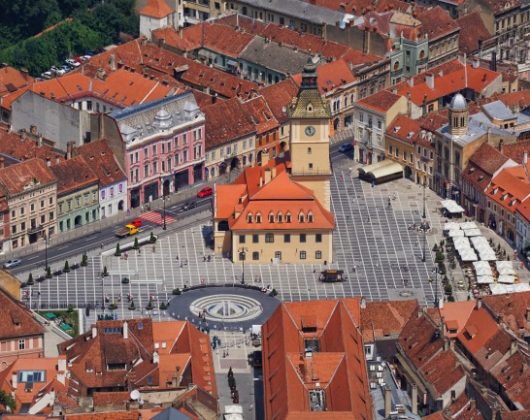 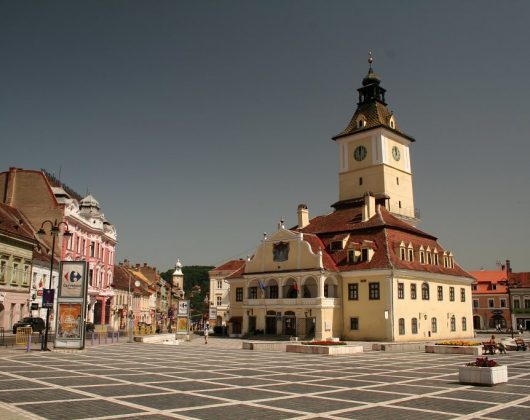 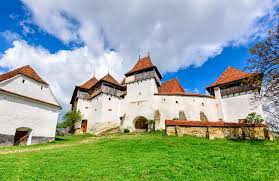 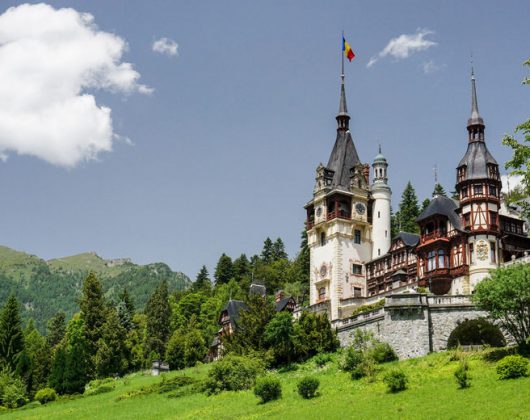 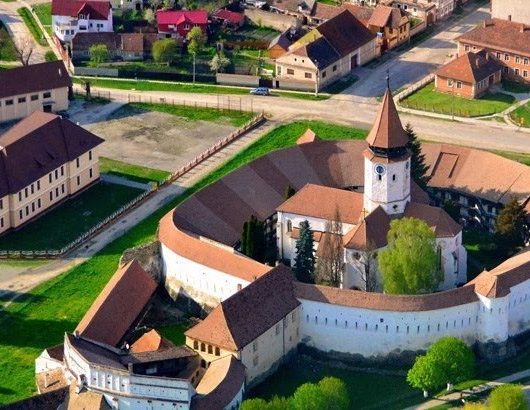 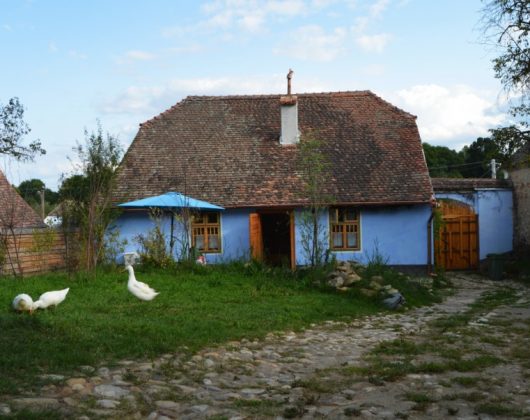 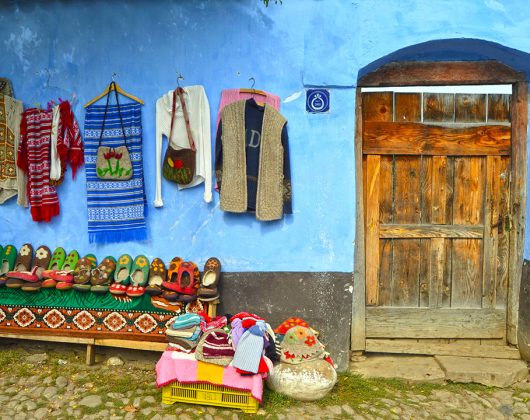 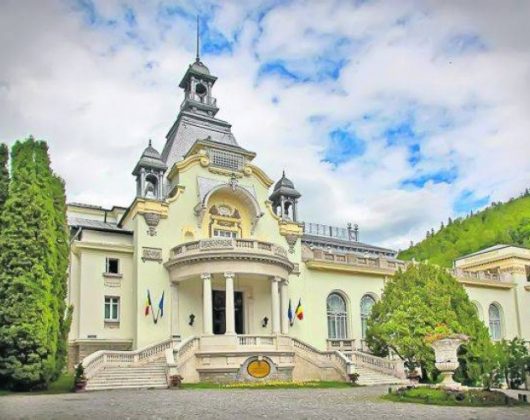 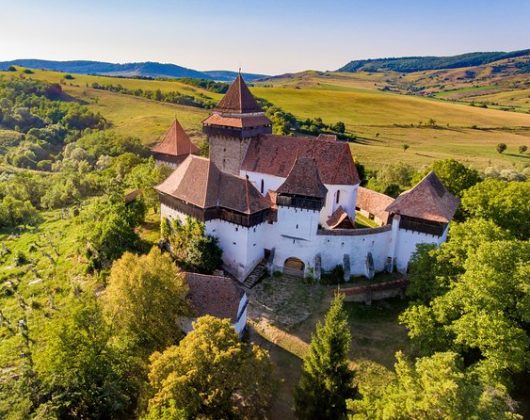 IMPORTANT! The fine print: Cosmo Travel is the company that arranges the Land Beyond the Forest 2-Day Tour. It is not responsible if sites on the itinerary are closed without prior notification, or for any reason the day of your tour.

A Taste of Northern Transylvania and Bucovina: 4 Nights/5 Days